First…an update after the big game: Kinsa’s data isn’t showing any significant signs of increased illness activity in California where spectators gathered to watch in person. Note, attendees over 5 years old were required to show proof of vaccination or a negative PCR test within 48 hours (or negative antigen (rapid) test within 24 hours) of the game. In addition to fans flooding LA to spectate, people around the country also gathered to watch the game at home, so we’ll continue to keep an eye on illness levels over the next week to see what happens with activity across the country following this event.

While Kinsa data hasn’t shown any significant increased illness activity in California, states in the South are a different story.

Kinsa’s data shows that national respiratory illness activity, which had been declining, started to plateau. Illness activity continues to remain below levels observed at this time during pre-COVID seasons (“normal illness season levels”). With this said, the number of states with increasing respiratory activity is rising, particularly in the South, and the increases appear to be driven by the pediatric population (0-12 year olds). 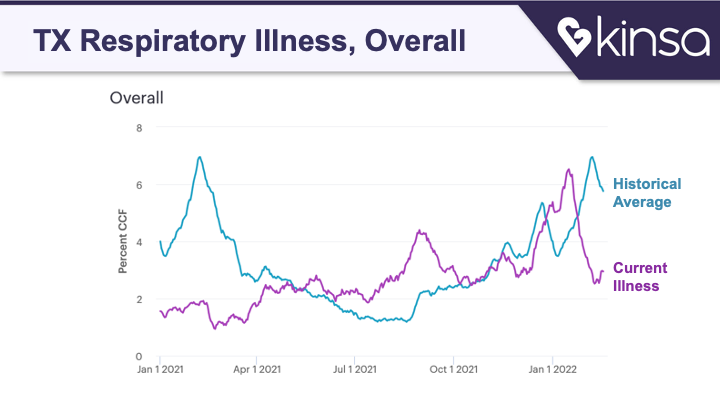 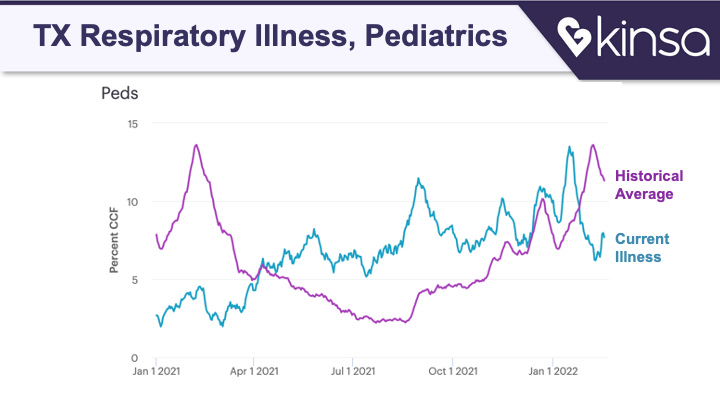 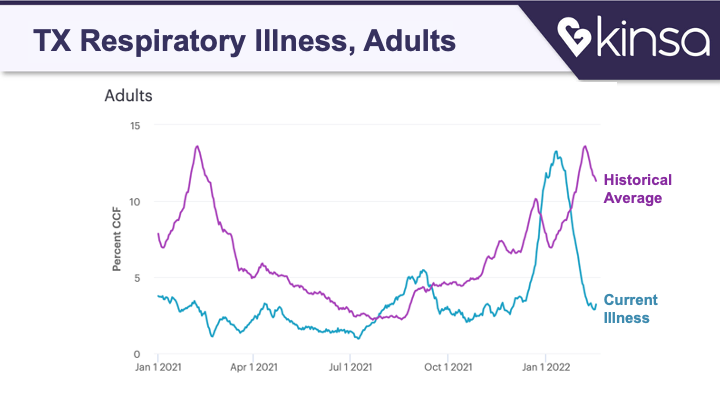 Increased activity in the pediatric population could be a result of respiratory illnesses like RSV or influenza, which remain low but are increasing in some regions. According to the C.D.C., some states in the Southeast are experiencing a rise in RSV percent test positivity. Flu activity is sporadic across the country, but local flu reports show signs that influenza may increase again this season. For instance, flu percent test positivity is starting to increase in Texas, and as of February 17, Virginia reported a doubling of positive flu tests over the past week. We’ll keep a close eye on illness trends in the South.

Note, new COVID cases in the US have fallen rapidly (more than 80% from the peak in January) after reaching record highs, and infection numbers remain similar to levels observed during the Delta wave. As states loosen mask mandates and the C.D.C. works on relevant guidance based on the current COVID climate, we’re watching illness levels across the country to see what will happen as masks come off. Stay tuned.

Readers, please note: One input in Kinsa’s HealthWeather COVID risk is daily confirmed cases as collected from state public health authorities by Johns Hopkins University. On the HealthWeather map, some states (like Florida and Tennessee) may appear to have lower COVID risk than they actually have, due to recent state reporting delays/ lags.