This Week in Illness, April 30

Illness metrics across the country trended downwards, while a few states saw increases in COVID-19 cases. The worst-hit areas at the beginning of the month, like New Jersey and the Upper Midwest, seemed to be on the mend. The rate of vaccination declined, continuing a trend from last week as US health officials “unpaused” the J&J vaccine. New York City also announced plans to reopen this summer fully. Finally, the CDC issued new guidelines for vaccinated individuals.

Nationally, Kinsa’s Influenza-like illness (ILI) signal trended sideways this week at around 0.9% of the population experiencing a fever. Long-duration fever (LDF), or a fever lasting at least 72 hours, leveled off after four weeks of steadily increasing. COVID-19 cases were down 27% on the 14-day average after a month of rising or plateauing case numbers. Hospitalizations decreased as well, a modest 3% and deaths are down 7% over the last two weeks.

Locally, Washington saw cases increase for most of the month, but reprieve may be around the corner. While ILI continued to increase, LDF dropped off this week, signaling the severity of illness has declined somewhat. This move could translate to a dip in COVID-19 cases in the next few weeks. In response to the growing case numbers, the governor in Oregon has reinstated some restrictions, and the governor of Washington may follow suit next week. 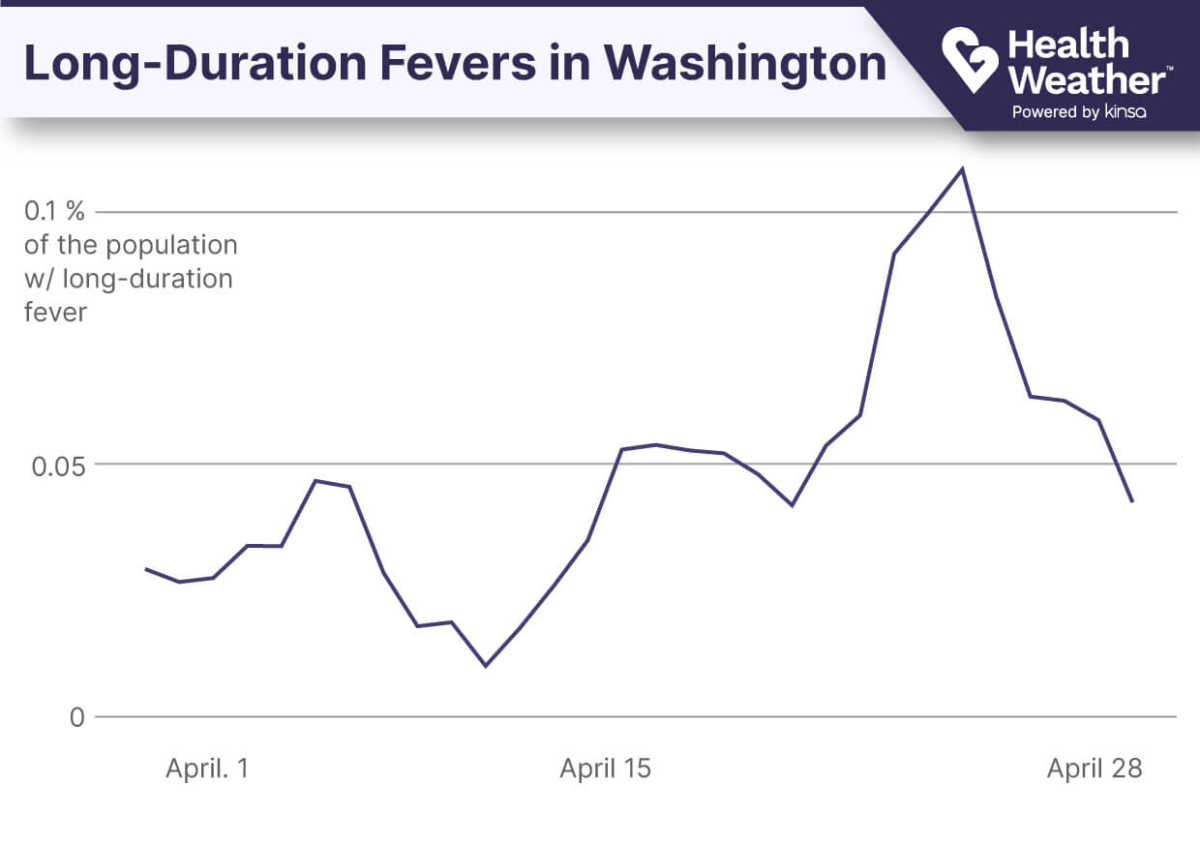 The Upper Midwest continued its recovery. Michigan saw a more than 40% decrease in the average daily cases and an 11% decrease in hospitalizations. Deaths, a lagging indicator, are still up 27% in the state. Illinois and Minnesota were on similar trajectories but from a much lower peak. Many states on the east coast saw similar declines which led the New York City Mayor to announce plans to open fully by July.

Pace of Vaccinations Continued To Slow

After 11 days of deliberation, the Johnson & Johnson vaccine was “unpaused” late last week, with officials saying the benefits outweigh the risks. The vaccine had caused severe side effects in a small number of people. It was paused to allow time to investigate how widespread the effects were.

The number of Americans vaccinated increased, albeit at a slower pace. 43.3% of the population has received at least one shot, and 30% are now fully immunized. The decrease in vaccine rates that began last week continued into this week, now dipping to an estimated 2.3 million shots per day, down from 3.3 million in mid-April.