This Week in Illness, February 26

This week had a mix of tragic and hopeful news. Deaths from COVID-19 surpassed 500,000. Meanwhile, vaccine progress continued and a third shot may be approved for use in the US as soon as Saturday.

Declines in COVID Cases Stalled, but Likely Due To Backlogs

While COVID-19 cases continued to fall for most of the week, the seven day average trended upwards over the last few days. This was likely due to a backlog in reporting and testing due to last week’s holiday and the inclement weather that paralyzed much of the south. It’s also possible we’re seeing the end of the decline that’s been prevalent the last few weeks. This second theory is supported by an increase in the number of fevers in our data, but we’ll need to wait and see if that translates into new cases.

A new variant was discovered in New York and is believed to have some troubling mutations which make it potentially resistant to vaccines. This news comes on the heels of a study from University of California, San Francisco which shows the California variant —announced in November— may be more transmissible. This added credence to the trends we reported while examining the winter outbreak in Southern California.

Vaccine Rollout Continues and a New Shot Enters the Fray

Vaccine rollout continued at a steady clip averaging about 1.5 million shots in arms per day, according to the New York Times vaccine tracker. New Mexico, South Dakota and Connecticut lead the charge in the lower 50, each with more than 15% of their population having received at least one shot.

Pharmaceutical company Johnson & Johnson’s coronavirus vaccine was recommended for emergency use by an FDA advisory panel on Friday evening. Authorization to use the vaccine may come as soon as Saturday. J&J’s shot would be the third authorized for use in the US and the first to require only one shot. The new vaccine can be stored in a refrigerator, which makes distribution easier, particularly in rural areas, and it was found to be 100% effective at preventing hospitalizations and deaths, and 72% effective at preventing disease in the US study. The vaccine was found to be safe, and trial participants generally reported fewer of the mild side effects of Pfizer and Moderna’s offerings, such as fatigue and fever.

Moderna also begun testing an update for their shots which will add protection for some variants at the cost of requiring a third shot.

Is It the End of the Decline? 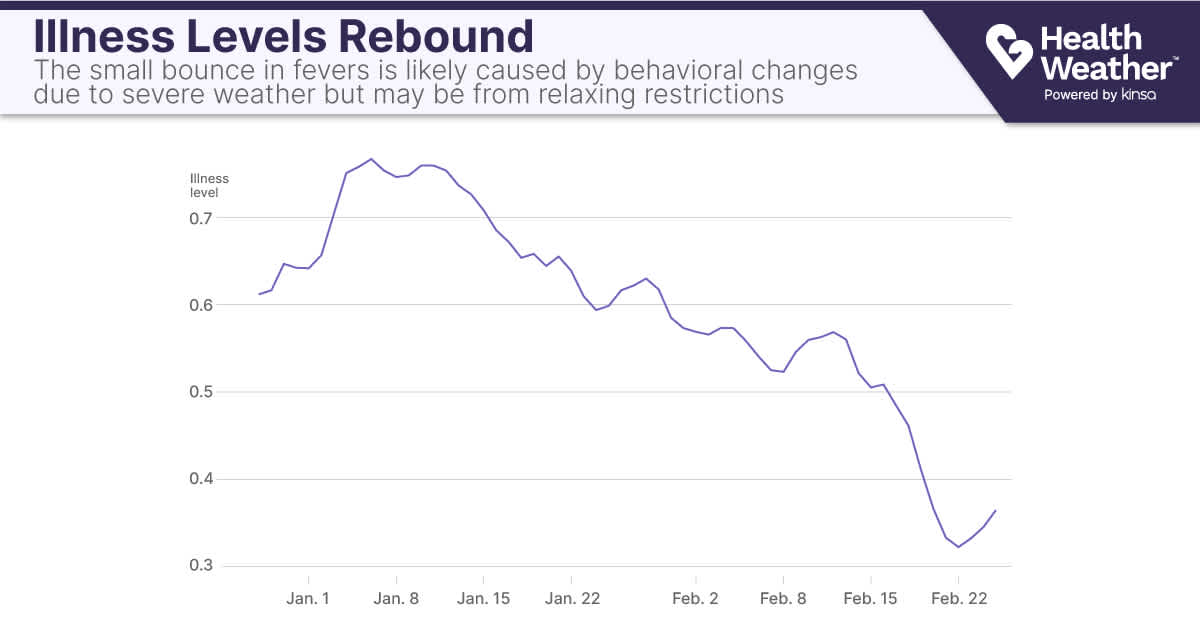 Kinsa data showed a nation-wide divergence of the 61+ age group, who are experiencing more fevers than the rest of the population. It’s unlikely this is caused by a surge in COVID-19 since people older than 65 are the most vaccinated group. Almost half of them have received at least one dose and about 18% have received both. Regardless of the reason, this contributed to the first sustained increase in fevers since the beginning of February. With major winter storms battering parts of the South last week, it’s possible these increases are from behavioral changes caused by the weather. But as cities and states relax restrictions, it also could be an early sign that cases will rise again.