Does it feel like everyone is sick this summer? Here’s why

Before the COVID-19 pandemic, summer was fondly thought of as the season when sniffles were few and far between. For those few months, we could reliably expect a break from most cold-like illnesses, as flu and colds seemed to consistently strike in the winter  - a season when we are more susceptible to infection by various respiratory viruses.

Starting in March and April of 2020,  prevention behaviors implemented to control COVID-19 substantially reduced activity of other respiratory viruses. Just as masking, for example, reduced the spread of COVID, it also led to very little circulation of other respiratory viruses during the 2020-2021 winter.  These historically low illness levels, while incredibly helpful for our healthcare system, left a large susceptible population with immune systems not accustomed to common viruses (particularly young children).

But then, in the spring of 2021, vaccinations became widely available (hooray!) and the freshly vaccinated public eagerly embraced the summer, ditching masks and mingling once again. This return to pre-COVID “normal” behavior, coupled with our weakened immune systems, left us far more susceptible to illness than typical.

And many respiratory viruses which had lain low took this as their golden opportunity!

The U.S. saw a significant rise in out-of-season RSV (respiratory syncytial virus) activity in the summer of 2021. RSV is a common respiratory virus that usually causes cold-like symptoms but can be serious for infants and older adults. The season typically starts in the fall, but research suggests that increasing susceptibility and behavioral changes could have overridden the counter-effect of warmer weather, allowing out-of-season RSV activity. 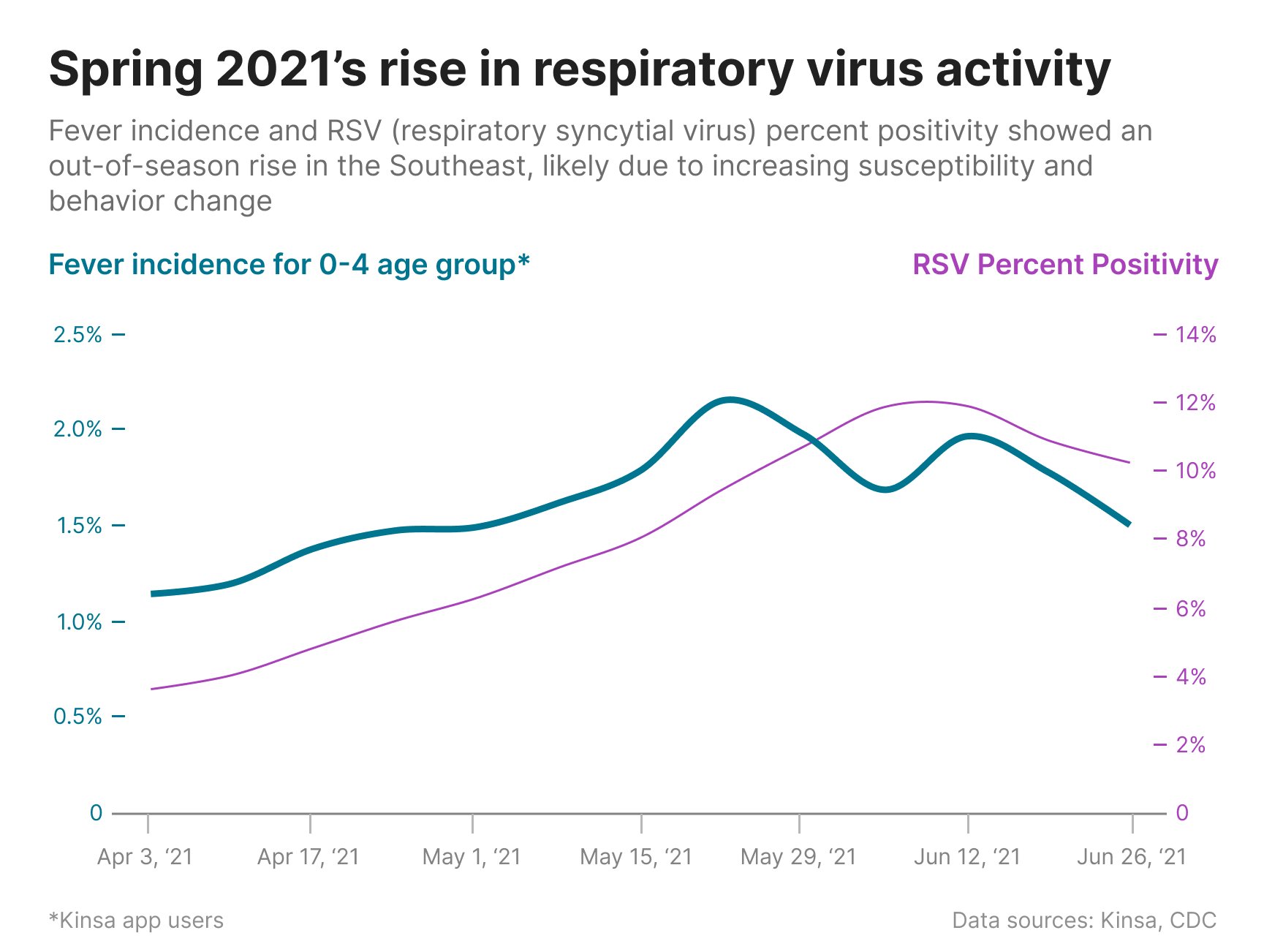 The figure below shows a fairly strong correlation between RSV percent positivity and Kinsa’s fever incidence among the 0-4 age group for each week during the spring of 2021.

While RSV made an out-of-season comeback in the spring of 2021, influenza activity thankfully remained low. But since Flu and RSV both typically peak in the winter, why didn’t we see out-of-season flu activity too?

Both RSV and influenza circulation are impacted by population susceptibility, prevention behaviors, and weather patterns, but unlike RSV, low levels of immunity and prevention behaviors were not enough to override the impact of  weather on influenza. Warmer weather did indeed lead to the virus lying fairly low.

While the U.S. saw some late season flu activity this past spring,  we haven't had a widespread flu season in over two years (a very small silver lining). That said, our immunity as a population -  derived from natural infection - is very low, and we face the possibility of a more severe flu season this winter.

We’ve said it before, but we’ll say it again -- the best way to prevent a severe season is to get vaccinated! The CDC recommends everyone 6 months and older should get an annual flu vaccine, ideally by the end of October.