In the US, COVID-19 Transmission Thrives in Nicer Weather

Warmer temperatures bring out diners, revelers and the coronavirus. The highest rate of transmission in the U.S. occurred when daily high temperatures were between 45 and 80 degrees, according to a county-level analysis of weather, mobility and case data from the fall and winter. The finding points more to how people respond to warmer weather than the technicalities of virus transmission: When the weather was in the upper 60s, case transmission was four times higher than at freezing temperatures. Similarly, people were more than twice as likely to go out to a restaurant or bar in warmer weather. 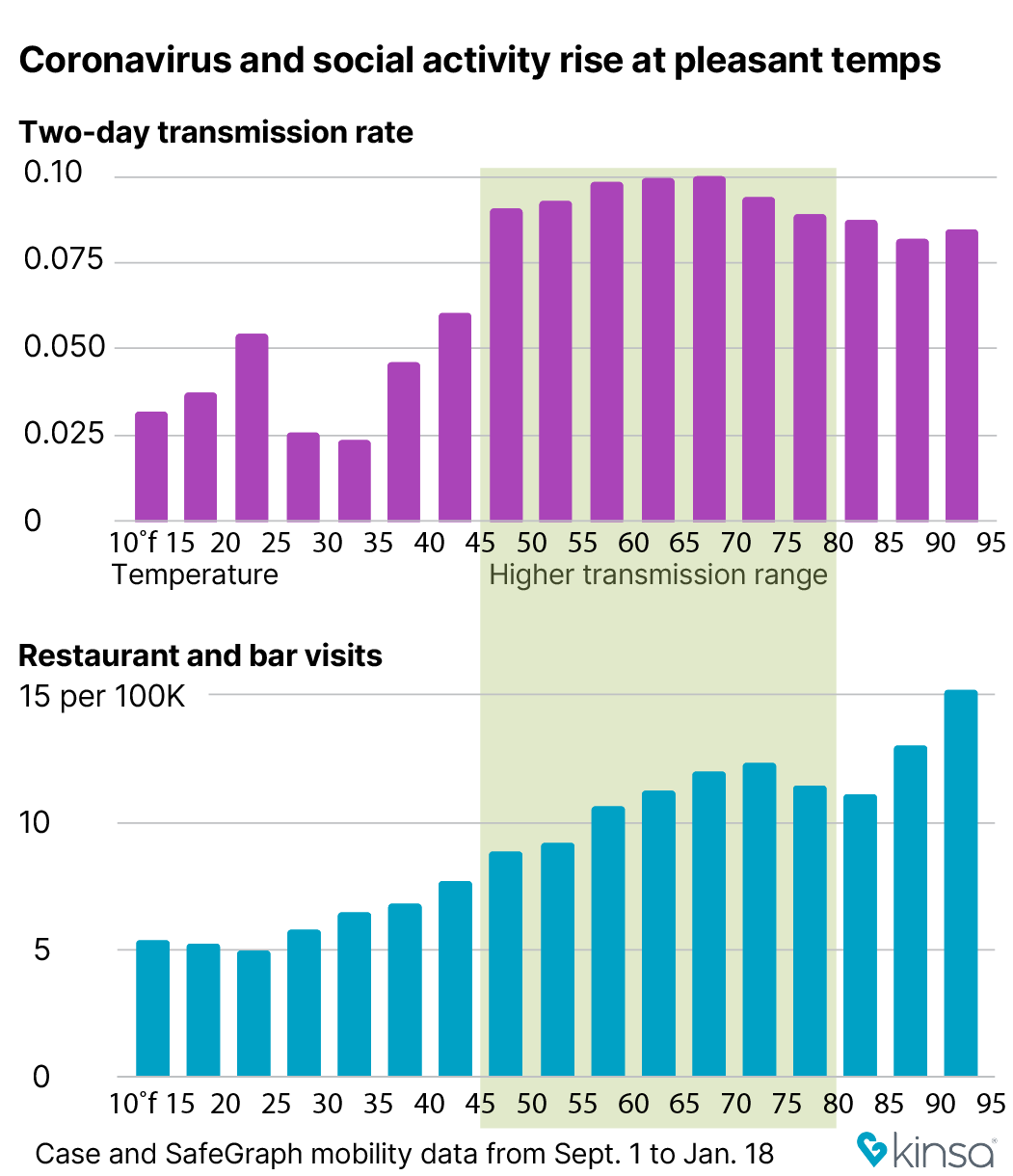 In contrast, other respiratory diseases like flu and cold are known to thrive in drier and often colder months, when lower humidity allows viral particles to linger in the air longer and people are more prone to be indoors together. The coronavirus in the U.S. is so far bucking that trend, indicating that human behaviors are likely a significant factor in transmission.

The correlation between weather and coronavirus cases echoes human activity. People were about 2.5 times as likely to go out to a restaurant or bar when the temperature was 65 to 70 degrees than when it was 20 to 25 degrees, based on an analysis of anonymized cell phone data from SafeGraph from September to January. Going out to dine or drink was more dependent on the weather than other non-essential travel such as going to the gym or places of worship.

Above 70 degrees case transmission falls off somewhat, while travel to restaurants and bars is higher on average. A likely explanation is that above 70 degrees, people are more prone to eat, drink and socialize outdoors, where virus transmission is known to be lower. 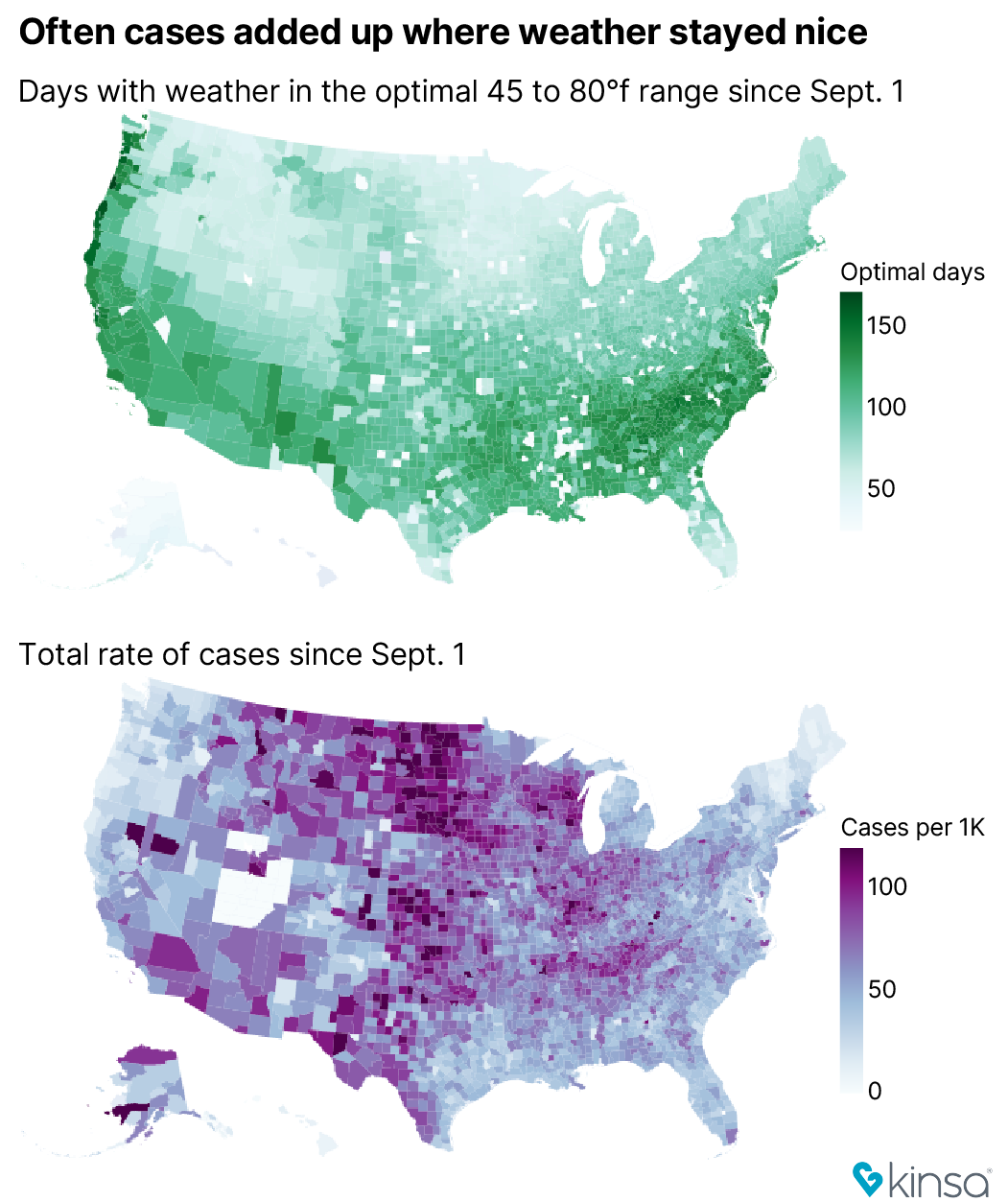 Weather data from the National Oceanic and Atmospheric Administration was correlated with known cases of COVID-19 with an 8-day lag to account for incubation and testing delays. That period is determined by using data from Kinsa’s network of more than 2 million web-connected thermometers, which shows real-time increases of febrile illness including from the novel coronavirus.

The findings underscore that new viruses don’t always behave like established human viruses. That was also the case in 2009 with H1N1, known as swine flu, which broke out in the U.S. in April that year, as the typical flu season was winding down.

The analysis is in contrast to studies across the globe, which show coronavirus transmission behaving more like the flu and cold, increasing at lower temperatures. That contrast highlights the difference between the virus response in the U.S., which has one of the worst rates of total virus cases, and the rest of the globe. An earlier study based on a fraction of counties in the first couple months of the pandemic also found that virus transmission in the U.S. decreased below 40 degrees, contrary to the global trend.

In certain regions like the Pacific Northwest and Deep South, cases instead follow the global pattern and are lower in counties with higher temperatures, possibly due to the significantly higher humidity in those areas. Other factors are known to impact infection rates such as socio-economic differences and variations in policies to combat the virus.

The findings suggest the possible failure of curbing transmission in certain settings, whether through lack of implementation or efficacy.  It also serves as a word of caution as temperatures again become pleasant and new cases are again increasing after a significant decrease this winter.